After the majority of the partners had arrived, we took a short (OK, maybe a bit longer than short) walk in Taranto with the guidance of Palma and Angela, our hosts. Finally, when all the partners gathered together by dinnertime at a small, homely pizzeria, and besides having the first real Italian dinner we had a chance to say “Cheers!” to each other with some local wine or beer in our hands. We also learned what “Primitivo” is, and how well it goes with ice-cream.
The morning of day 1 was dedicated to a partner-meeting in the Luigi Pirandello Institute of Taranto. First we met the headmistress of the Institution, and had a fruitful discussion on the tasks of the partners in relation to the project. Before lunch we enjoyed a small performance of the school’s choir, and a local brass-band. Most of us never heard Christmas songs played by the brass!The delicious lunch was presented by the Italian adult learners, who take part in the project. There were tons of delicious traditional local food on the tables; we couldn’t even taste all of them! 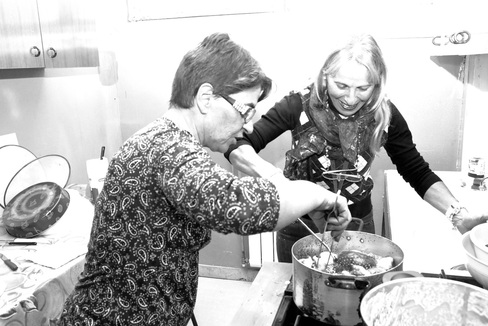 Afternoon we jumped on the bus, which was provided by our hosts to take a guided tour in the region and get acquainted with its history and sights. First we targeted the UNESCO World Heritage Site Alberobello, especially the “Zona dei Trulli”. It was almost dark, when we said good bye to this lovely town and headed to Martina Franca. Despite of the chilly weather, we were roaming around the old town, enjoying the historic atmosphere, and admired the baroque buildings and churches. We had our dinner at a nice local pizzeria.
We started the second day at the Institute, just like the day before. The partners started to introduce their participants to the rest of the group. It took longer, than we expected, so we postponed this part of the meeting, because we had a tight schedule: the bus was waiting for us to take to another part of Italy. We visited Laterza first. We started with a coffee (some had hot chocolate, but it was just as good as the espresso) before we went underground: we spent sometime in the “Spanish cantina”, where we could see the beautiful frescos and learned the history of the mysterious cave. Before lunch we visited a nice church in the old town, and checked the river which has scooped a canyon into the rocks around the city. The lunch in Laterza was as ample as all the meals we had during our visit in Italy.
Our final destination in our little tour was the amazing Sassi of Matera. Our guide told us the history of the caves and the town from ancient times till the present – the famous film shootings in Matera. We visited a small museum, checked a hotel in “sassi style”, and finally gathered together for group photography in the sunset.
When we got back to Taranto, we had a final group meeting at the Hotel, where we finished the introduction of the participants, and agreed on the tasks the partners have to fulfil in the future, so that we are going to have such a successful next meeting in Budapest April 2013 as we had in Taranto in November 2012.