The 2th project meeting in  Budapest

All the partners luckily arrived on time, so we had a partner-meeting according to our schedule, before the actual programme had started. Besides talking over the tasks the partners had to fulfil according to our project plan, we had some time to remember the wonderful time we have spent together in Taranto, Italy, last year. After our meeting, all the participants had joined the coordinators, and we had a nice dinner together at a local restaurant nearby. It seemed, that everybody was looking forward to the next two days ahead in Hungary.
Next morning all the adult learners met in a classroom and after a simple icebreaking game, learners from the different countries gave their presentations on local monuments, and on national traditions, songs, recipes related to Christmas. We also had a chance to listen some beautiful songs from Portugal and Romania. And at the end of the presentations, we all sang a German Christmas song “Oh Tannenbaum” together, in the sunny April in Budapest. Before lunch, we played intercultural group activity which helped participants to get to know each other a bit better.
After lunch we divided the group to four smaller mixed international groups, and the game called “City rally”, combined with the “Great Hunt for Lions in Budapest” had started.:  The aim of the game was to explore Budapest. Each group had to visit the same historical sites of Budapest in different order, while they had to take as many pictures of lions in Budapest as they could. At the sites they had to answer different questions related to the actual site. At the end of the city rally, all participants seemed to be tired but satisfied. We had a nice dinner together in the city.
Next day we travelled to Pannonhalma by bus, and took a guided tour in the monastery which has a 1000 year old history. First we watched a short documentary on the everyday life of the monks and the living tradition of the Benedictine community. Then we walked up to the monastery, where we enjoyed the view from the viewpoint then visited the basilica and the amazing library. 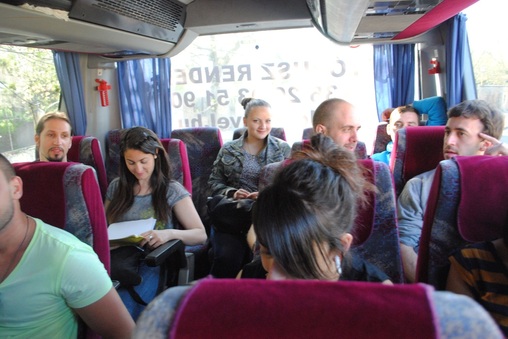 We left Pannonhalma and soon arrived at the Sándor Lukács school in Győr, where we had a simple but typical Hungarian lunch. Our guests had a chance to taste different Hungarian specialities. Some found the paprika, others the goosefat a bit weird, but all in all enjoyable. After lunch we visited the classrooms and workshops of the school. We also had a chance  to sit behind the wheel of an Audi TT – since the school train workers for the Audi factory in Győr.

In the afternoon we went to the bank of the Rába river in the city centre, for a short paddling in a dragonboat. It was a lot of fun, some participants had never sat in a dragonboat before – and decided, to look for opportunities when they get back in their country - back in the future.

Before dinner the group took a short sightseeing and ice-creaming tour in the historical city centre of Győr.

We went back to the school, where we had a traditional dinner with real Hungarian goulash combined with a presentation (and tasting of course) on the history of “pálinka” a special Hungarian spirit. At the end of the dinner a wine specialist helped the group to taste some really good Hungarian wines. After dinner we listened to some Hungarian folk music. Too bad, we ran out of time so we could only dance for just a few minutes before the bus took us back to Budapest.

On the way back to Budapest in the bus the loud singing of the group gave evidence to that the wine was good, and we all enjoyed being together.

We all wished we had had more time together in Hungary.